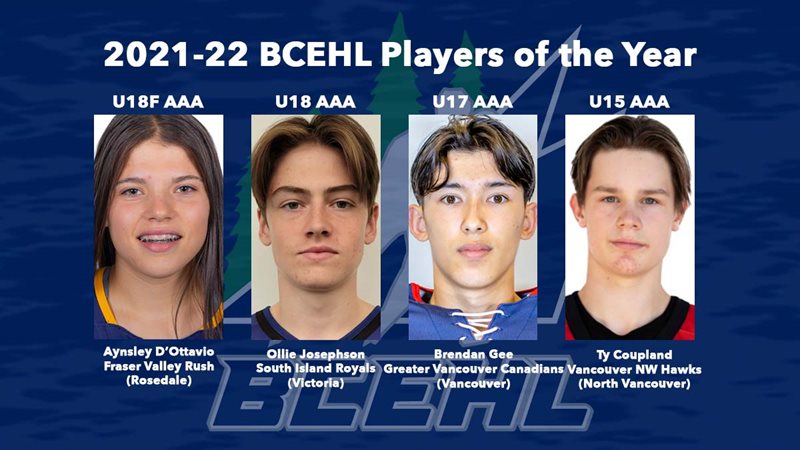 Aynsley D'Ottavio (Fraser Valley Rush / Chilliwack MHA) has been named the 2021-22 Female U18 AAA Player of the Year. D'Ottavio had an outstanding season, recording 55 points (11g-44a) in 30 regular season games.

The defender led all players in the league in points, racking up 1.83 points-per-game. Aynsley represented Team BC at the 2021 Western Regional Women's Championship in November, helping the team to a gold medal. She helped the Fraser Valley Rush to a 28-3-1-0 record in the regular season before claiming the BCEHL Championship, Pacific Regional Championship, and a silver medal at the 2022 Esso Cup.

Ollie Josephson (South Island Royals / Juan de Fuca MHA) finished the regular season in a tie for the league-lead in scoring, recording 53 points (28g-25a) in just 28 games. He also led the league in points-per-game, averaging 1.89 each outing. He was a member of Team BC and scored seven points (4g-3a) in the 2021 WHL Cup, helping the team to the gold medal.

Josephson had a highlight year as he was selected fifth overall in the 2021 WHL Draft by the Red Deer Rebels in December, 2021. He finished the season with the Rebels, appearing in six games for the club.

Gee helped the Greater Vancouver Canadians to a third place finish in the 2021-22 regular season standings, contributing to their 27-8-1-0 record.

Ty Coupland (Vancouver NW Hawks / North Shore Winter Club) managed to record a league-high 66 points (35g-31a) in the regular season, despite playing in just 21 games due to injury. Coupland also recorded four game-winning goals, which was tied for second-most in the league.

Coupland's impressive season was highlighted by his selection in the 2022 WHL Draft in May, where the Swift Current Broncos chose the forward with the 42nd overall pick in the draft. 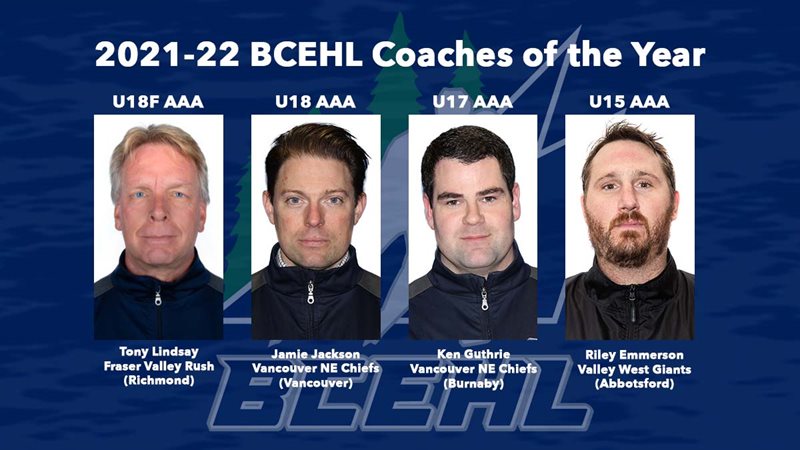 Tony Lindsay (Fraser Valley Rush / Richmond) led the Fraser Valley Rush to a league-best 28-3-1-0 record. His Rush team scored a league-high 140 goals, while conceding a league-low 43 goals against. They finished the regular season 10 points ahead of the second placed Northern Capitals, before going on to claim the BCEHL Championship, the Pacific Regional Championship, and a silver medal at the 2022 Esso Cup.

Jamie Jackson (Vancouver NE Chiefs / Vancouver) and his Vancouver NE Chiefs team finished atop the regular season standings in the U18 AAA league, racking up 58 points (26-4-1-5) in 36 games. The team scored 161 goals this season while conceding only 104, for a league-best +57 goal differential. Jamie led the Chiefs to a BCEHL Championship and a Pacific Regional Championship, eventually progressing the team to the TELUS Cup for the first time in team history.