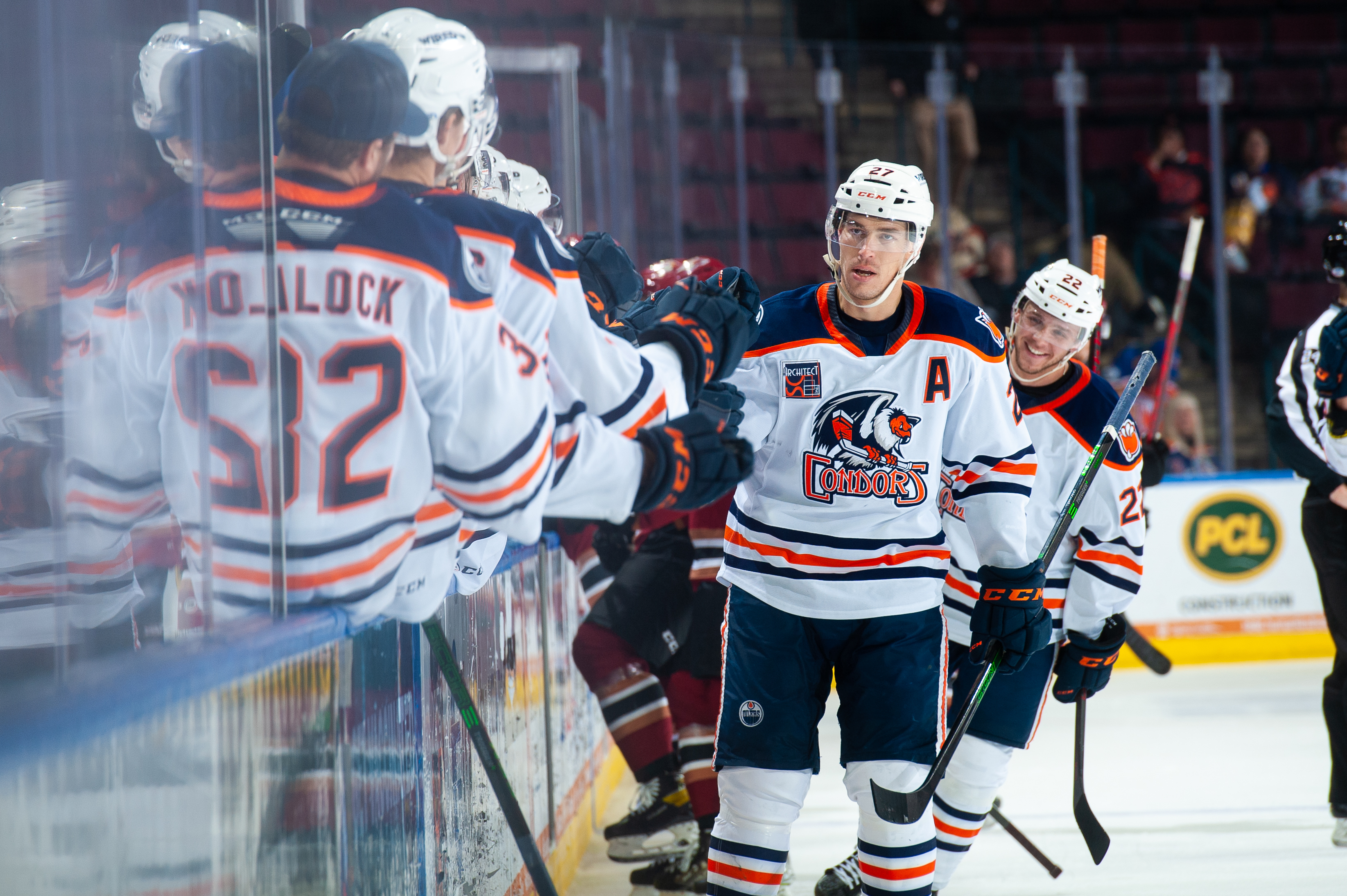 It’s been said that good things happen to good people and that’s likely a big part of why Adam Cracknell is now in Beijing, donning Canada’s colours as part of the men’s Olympic hockey team.

A veteran of many hockey battles, who has suited up for 19 different professional hockey teams over his 17-year career, the former Juan de Fuca minor-hockey player (who then went on to the Saanich Braves) couldn’t be more ecstatic about this latest opportunity.

Cracknell, now 36, takes a break from his role as alternate captain with the Bakersfield Condors of the American Hockey League, to lend a hand for Hockey Canada. Never in his dreams would Cracknell have imagined such an opportunity.

“The goal was to play in a World Juniors, but that was the 2005 Dream Team, so I didn’t have much of a sniff to play in that one, it was such a powerful team,” says Cracknell, who led the Kootenay Ice in scoring with 42 goals and 51 assists in 72 games in his last year of junior in the Western Hockey League.

“To be around those guys and the excitement they got from winning gold, I was happy for them. I had teammates who were on that team. But the Olympics, no - who would’ve thought that something like this in the world would happen and you would have the opportunity to do it?” he says of how COVID has thrown a wrench into the plans of having National Hockey Leaguers play in Beijing.

“I’m just happy playing hockey. I love the game and the life that it’s given me. The travel experiences. I’ve played this long just because I love it and to play for Team Canada at the Olympics is a great milestone for myself.”

“To play for Canada is an honour and I’m just looking forward to get going. This will be something that I can look back on for the rest of my life. It’s going to be an amazing experience. It’s been a long journey, but I’m happy it’s brought me this far.”

This will be Cracknell’s second time representing Canada, having experienced playing in the Spengler Cup in Davos, Switzerland, in 2018. Ironically, that’s where Cracknell and his current Team Canada teammates were busy preparing in a mini training camp for the Beijing Olympic Games.

Beijing is also where Cracknell played the 2019-20 season with the Kunlan Red Star of the Kontinental Hockey League just before COVID first struck.

“It was a part of my career where I had an opportunity to go over. I was looking for another chapter in my career and I had that opportunity to go over knowing there were a lot of North Americans and a lot of guys that I’ve played with or against,” Cracknell says of that experience. “They spoke very highly of it. I went over for the experience of playing in the KHL. It’s such a great league. I did enjoy my time there once we got settled in Beijing. We got a house, my wife (Teresa) and two daughters at the time lived in downtown Beijing and we got to know the area and really enjoyed the culture and the city.”

Cracknell, who along with Teresa now have three daughters, was looking forward to travelling and seeing a part of the world that he’s never been to and never thought he’d be playing hockey in.

“We had a great group of guys, a great facility and we had as many fans as we could. I think we were averaging about 2,000.  I did get to see the rink that we will be playing out of (in the Olympics). The Olympics will be very special just because it’s a place where I have played, and I’ll be very familiar going back to.”

Asked if he will be the team’s unofficial tour guide, the former Victoria, B.C., resident, who now calls Cranbrook, B.C., home in the off-season, says: “I know where The Cheesecake Factory is and the grocery store, so I’m good to go.”

Those that know Cracknell on a more personal level, explain that’s exactly what he’s like, putting family, teammates and friends ahead of himself. So being selected to represent Canada at the Olympics is almost like karma, for the Prince Albert, Sask., native, who once was a stick boy for the WHL’s Raiders hockey team.

“We all grew up as Canadians watching the World Juniors and the Olympics, that’s what you got up early for, to watch and support your country. To wear the jersey now, especially in practice, means so much,” says Cracknell. “Everyone back home reaches out and it’s a dream come true. We all say it’s a huge honour to wear the Maple Leaf and to play with pride. Hockey is our life, and we know what it means to represent our country, so this is an opportunity that a lot of us thought we might not ever get.”

“I’m looking forward to wearing that jersey and being a part of the Olympics and giving my best effort to go for gold. It’s such a huge honour and something I will never forget. My family; obviously we’re not able to bring our family just because of what’s going on (with COVID), but I know that back home I have their full support and you can’t do that without your family.” 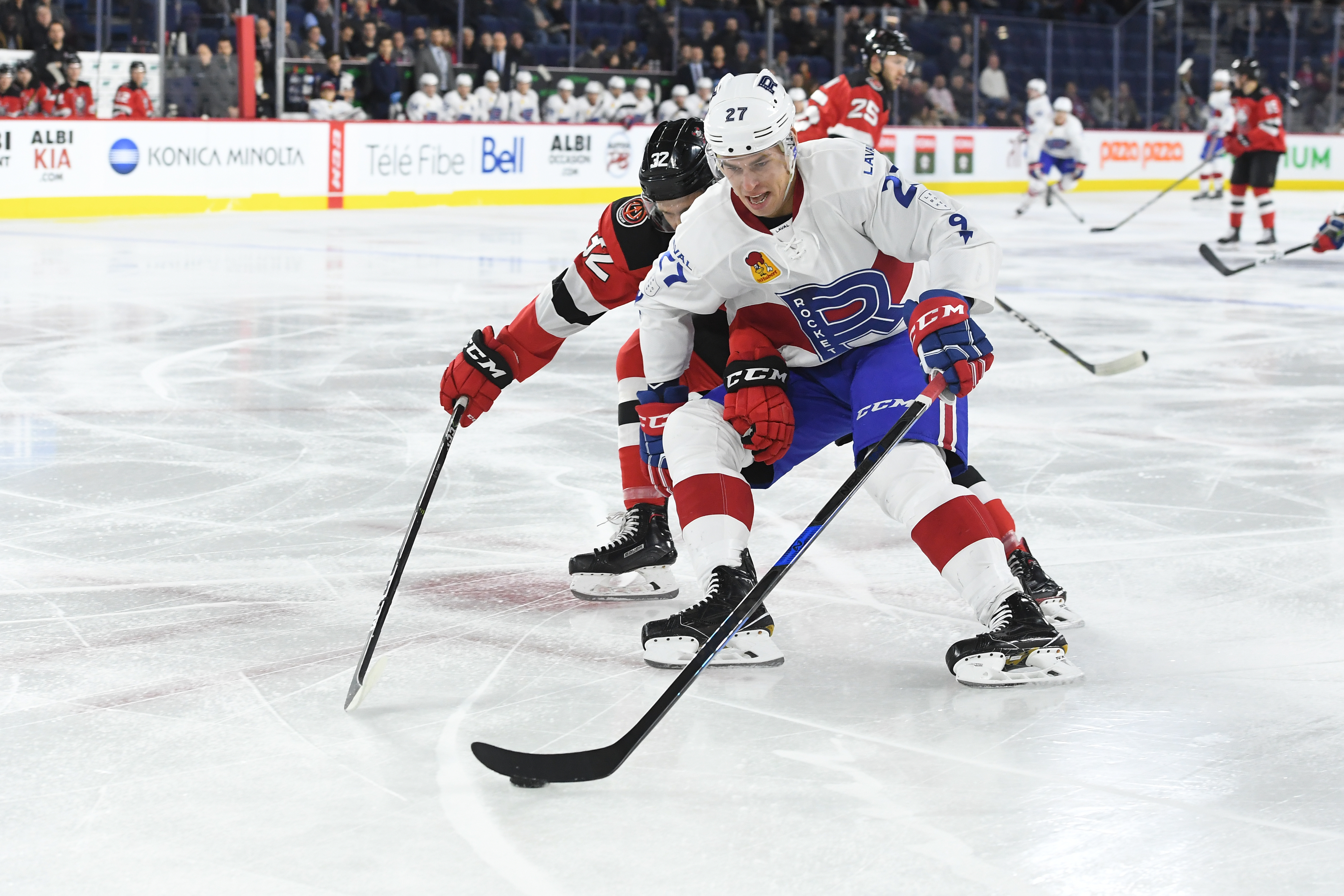 Asked about his minor hockey days, specifically with Juan de Fuca and then advancing through Junior, Cracknell was quick to give credit where he thought it was due.

“My parents - definitely, my mom and dad,” he says of Pat and Peter. “They sacrificed a lot in minor hockey, like a lot of us, working bingos or recycling and raising money for tournaments just because we were out having fun - kids out playing hockey.

“The goal is always to play in the NHL, and we know how difficult that is. But to have a career in hockey is just as difficult, so definitely, it was my parents who got me into hockey and here we are in my pro career.”

“My wife has been my biggest supporter and it doesn’t come without any challenges for her. Every time I get traded, we have to move the kids, or if we sign somewhere different; there’s a lot on her, so she’s been my backbone and she’s helped me achieve a dream like this. For her to be a part of it is just great.”

And that, too, comes as no surprise to those close to him.

“Nicest guy in hockey, and that’s not just me saying that,” says Jeff Compton, assistant coach with the Victoria Royals of the WHL and assistant hockey director/coach at Shawnigan Lake School. “Ken Hitchcock (former NHL head coach, who also won gold with Canada’s Olympic team in 2014) will tell you that and so will Rob Blake (Hockey Hall of Famer and L.A. Kings general manager).”

Cracknell, who attended Belmont Secondary in Langford, also trains with Compton in the off-season and the two recently ran into each other in Abbotsford as Bakersfield was playing the Vancouver Canucks’ farm team. The two had planned to go to dinner but the phone rang and its was Team Canada calling.

“He said he just got the call and I said, ‘So you’re going to the Olympics?’ And he said he had to get permission from his wife. That’s what he’s like,” says Compton, who also relayed a story of Cracknell joining in on a video session with Compton’s students. “He spoke to all these kids and then he said he was putting his phone number down in the chat and that players could call him if they had any questions.”

That’s Cracknell’s strength and community plays a big part of his life. He is now also part-owner of the Cranbrook Bucks of the British Columbia Hockey League, having set his roots down in the area during his four-year WHL career with the Kootenay Ice.

“Thank you to everyone in Cranbrook,” Cracknell says in a post on the Bucks’ website. “It’s not just representing the country and myself, it’s the town, the people who have helped me become me.” So now the former ninth-round draft pick of the Calgary Flames is at the Olympics and is one of the team’s leaders.

“We all have the same goal and that’s to win gold. It doesn’t matter what you’ve achieved in your career or who you are or what you’ve done, it’s about having a common goal,” he says. “The Spengler Cup is obviously an exciting tournament and Davos is a beautiful place. It’s always a tournament that I hope guys get to experience and I try to tell them how awesome the tournament is and how great it is to play for Canada. But on an international stage, the Olympics, will be a whole other experience, I’m sure. Once you put that jersey on it becomes real. I wish I knew how I’m going to feel, but I know there’s going to be a lot of excitement and nerves.”

He readily admits to the nerves, even though he’s had stops in the NHL in St. Louis, Columbus, Vancouver, Edmonton, Anaheim and with the New York Rangers, with 21 goals and 43 points in 210 games played. With Vancouver he scored the winning goal in overtime for the Canucks in the Kraft Hockeyville game played at The Q Centre in Colwood in 2015.

“I’ve been fortunate enough to play as long as I have, but also play with a lot of great players throughout my NHL career. I’ve learned how to become (not only) a great professional, but also a good person. I feel the things that I’ve learned from certain players in various organizations has helped me achieve that,” says Cracknell, who has nine goals and 23 points in 28 games in Bakersfield so far this season.

“I do want to get into coaching when I’m done, so the longer I could play the longer I can learn from coaching staffs. Right now, I’m just enjoying playing and I’ve learned off the ice how practises and game plans are being discussed, but at the same time I’m having fun playing hockey.”

He says the experiences at the NHL level has been great, “but I know I’m at a different stage of my career and I want the young guys to have success. When young guys get called up, I’m just as happy for them getting called up as I was my first time. It’s nice to see young guys get the opportunity.”

That’s Cracknell in a nutshell.

“We did a lot of scouting on a lot of players, close to 100 players in our original list and we started cutting it down and dwindling to the numbers we have now,” says Claude Julien, who was also part of that Olympic gold-medal team in 2014 and was to coach Team Canada before he broke his ribs while preparing in Switzerland.

“Each of these guys have their own strengths and things we were looking for on our team. Adam has been around for so long and he’s been nothing but a great teammate everywhere he’s gone. He’s had success and he’s still having success right now in American Hockey League and we felt he would be a great addition. He can play centre, or he can play wing and he’s one of those guys who told me. ‘Whatever you want me to do, I will do.’ Those are the guys you want to pick, the guys with the right attitude.”