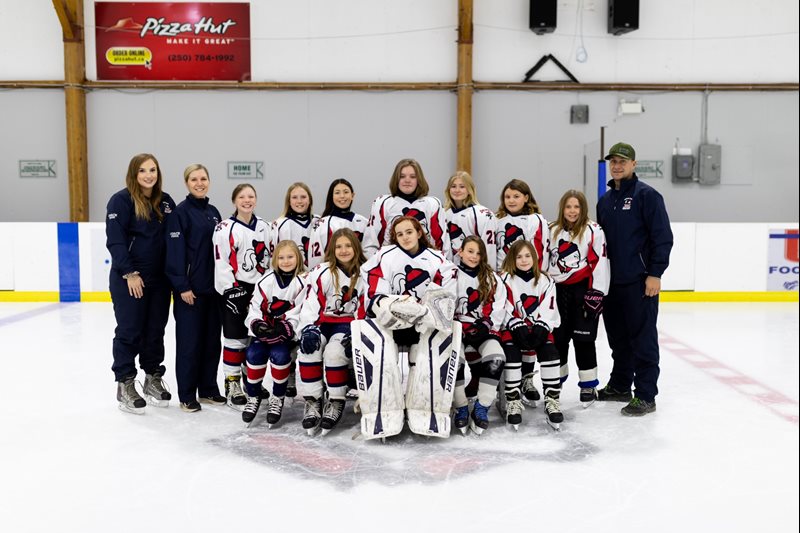 Micah Zandee-Hart grew up in Saanichton, playing the sport she loved in the Peninsula Minor Hockey Association and telling anyone who would listen that one day she would make it to the ultimate level.

“Yeah, I used to tell everybody that I would make it some day,” Zandee-Hart chuckles. “That’s what I always wanted to do. I believed it as a kid and as you grow up you start to doubt your dreams a bit. But when I moved away from home at 15, to play at the Okanagan Hockey Academy, Gina Kingsbury was my coach and Emily Clark was a teammate.

“I think playing with Emily and being coached by Gina, that was when it really sunk in that I could make it happen if I committed to it and didn’t let go of that dream I had.”

That dream has become a reality for Zandee-Hart, who just turned 25, and can officially say she has made it, along with Clark, to the Canadian Women’s Olympic hockey team competing in Beijing. The Saanichton defenceman is the first British Columbia-born female to achieve that level and she couldn’t be more proud.

“I found out just over the holidays, just after we got back from our last U.S.-road trip. That’s when we were notified anyways,” she says, recalling that inspiring day. “We were all kind of in COVID-protocol because of our trip back from the U.S.

“I was in a hotel room in Victoria, which is the first time I've ever stayed in a hotel room in my hometown, and I found out on Zoom, which was a little bit different, but a sign of the world we're living in right now,” she adds. “So, I guess it was typical of our past two years, but maybe not the way that I envisioned it.”

She was staying at the Marriott at the harbour when the call was completed.

“I was very excited. Four years ago, I was on the other end of one of those calls, finding out I wasn’t going (to the Olympics) and I remember how devastated I was,” she recalls. “So, to hear the words that I would be going definitely just kind of gave me goosebumps.

“It was an elated feeling, something like a dream coming true, I guess. I remember taking a deep breath and then I remember, I started crying thinking about everything it took to get to this level. I’m not a super emotional person, but I was definitely overcome with emotion that day.”

She immediately shared the good news with her family, parents Mick and Patricia, brothers Benn and Nate and sister Magda.

“I think my mom was the first one I talked to and then I slowly made my way through my entire family.”

Needless to say, the news filled the hearts of the Hart clan and reaffirmed Zandee-Hart’s beliefs all along, that one day she would be the first B.C.-born female to make it to the Olympic level.

“I think I will be the first of many,” she says determinedly. “Our women’s game in B.C. is still growing. If you look at our U-18 success at the national level, we aren’t always at the top. Since I was there, at U-18, it’s been eight or nine years, and each year it seems like we’re getting closer and closer and we’re producing more players to get to that national level for hockey. So that’s exciting.”

And the excitement that she could lead the way for many other B.C. players inspires her even further.

“No, it doesn’t (get much bigger),” she says of her Olympic trip. “It’s been an odd time, with so much going on in the world, and trying to stay away from COVID, while also gearing up for the biggest tournament of your life.

“There’s a lot of factors going into it, so it took a while for it to sink in, that we were going and that it’s happening. I think now that the days are coming closer to leaving it’s starting to sink in,” Zandee-Hart added, prior to departing to Beijing. “I know our teams is confident and excited. We’re looking forward to getting there and looking forward to competing. We want to get there and show the world what we have.”

Zandee-Hart has tugged on the Team Canada jersey before, once at the 2019 World Championships - where Canada finished third - and competed in two Four Nations Cup events, which include Canada, the United States, Sweden and Finland. She has also faced the Americans several times in rivalry series.

She was also named to the 2020 World Championships team, but that event was eventually cancelled. This past spring, she had shoulder surgery, so she watched her teammates this past summer in Calgary.

Zandee-Hart, who first began playing hockey at age four, played integrated hockey from that tender age until she was 15 when she moved away from home.

“I didn’t have to think too much about how that would work. I was always welcomed with open arms,” she says. “I made the rep teams all growing up. Things were a little different, changing in other dressing rooms or at home, or things like that, but in terms of my teams or my association, there were never any questions asked. I was always accepted and encouraged to pursue my dreams just like my male counterparts.

“I stuck with the boys for a long time because I grew up in a small community and I was able to play rep and continue to develop. I grew pretty early (physically), so I wasn’t tiny. I wasn’t small and there wasn’t necessarily a risk of being injured against the boys at that age.

“That definitely prepared me for this level. When you come in as the only person from B.C. and maybe not knowing as many people - or coming to the national team as a young player - you have to have that strength to believe in yourself.

“Growing up where I did and sometimes being the only girl or having to train on my own for a female team because I didn’t have any teammates in town, that gave me the self determination to get to this point.”

Zandee-Hart did dual-card with the Victoria Ice Hawks girl’s team in Pee Wee one year and they won provincials that season. She also played spring hockey in Vancouver in Pee Wee and Bantam and got a taste of girl’s game there. After her stint at the Okanagan Hockey Academy, she played two seasons for Cornell University. She then took a year off for the past Olympic cycle and then went back to Cornell for two more years. She was a three-year captain with the Big Red of Cornell.

“Honestly, going to Cornell was probably the best decision I ever made in my life. I’m very fortunate I was supported by my family making that decision to go to an Ivy League university. I believed in the program, and I knew I would be challenged and that’s exactly what happened,” she says.

“Coach Doug Derraugh, who is also a coach on our national team now, taught me so much about work ethic and never giving up and being an underdog, like we were sometimes at Cornell. He gave me the opportunity to be captain, be a leader and grow as a player. But it also taught me to grow as a person, more than anything, going to a school like that.”

So much so that when she was asked to help the Capital Region Female Minor Hockey Association in the summer of 2020, she jumped at the chance, running a development session and adding weekly on-line mentorship sessions throughout the summer.

She’s quick to answer when asked what advice she would give to the younger girls in B.C. hoping to follow in her strides.

“One thing I always think about is taking ownership of your dream, whatever it is. It’s yours,” she insists. “In sport, it’s up to you, so you’re going to get to get out of it what you put into it. If you want to make it happen, you have to reach out to coaches and put in the extra work. No one else is going to do it for you. At the end of the day, if it doesn’t happen, at least you know you did everything that you could.”

Zandee-Hart is proof of that.

Ice Chips: As of the posting of this article, Canada sits 2-0 in the round robin portion of the tournament, and Zandee-Hart collected her first assist, and the first point by a B.C.-born athlete for Canada in Women's Olympic Hockey.