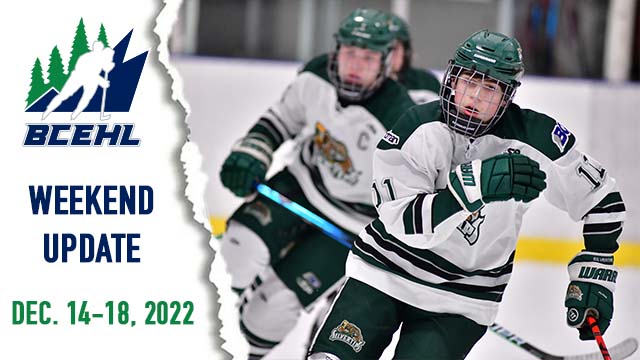 Saanichton, B.C. - This week's BCEHL action features the U18 showcase, which begins Friday in North Vancouver and Port Moody. Let's take a look at what else is going on around the BCEHL!

The Female U18 AAA league is not in action this weekend as they have a league-wide bye week. The league will return to action after the holiday break.

There are no Female U18 games on Saturday.

There are no Female U18 games on Sunday.

The U18 league kicks off its first showcase of the season this weekend in the Lower Mainland from December 16th-18th. The showcase will take place at the Karen Magnussen Arena in North Vancouver, with one game scheduled at the Port Moody Recreation Complex.

On Friday, Port Moody Minor Hockey Association hosts the fifth-place Fraser Valley Thunderbirds (11-8-0-0) and the fourth-place Vancouver NE Chiefs (10-7-2-1) in a matchup of two teams separated by only one point in the standings. This game will take place at the Port Moody Recreation Complex and will mark the third meeting of the season between the two teams. The Thunderbirds were victorious twice when they played a home-and-home series on October 29th and 30th. This matchup will include some of the league’s top skaters, including Thunderbirds' forward and October’s U18 Player of the Month, Brendan Ruskowski, and Chiefs' forward and November’s Player of the Month, Josh Kelly. Ruskowski’s 30 points (10g-20a) leads Fraser Valley and is good for sixth in league scoring, while Kelly’s 37 points (20g-17a) leads his team and ranks first in the league in goals and points.

Two of the top teams in the U18 league clash on Saturday when the league-leading Greater Vancouver Canadians (16-2-1-0) meet third-place Vancouver NW Hawks (12-6-2-0). The two squads began their seasons against one-another, splitting a home-and-home series on September 24th and 25th. Goals from Dylan Nazareth and Isaac Zed helped the Canadians to a 2-1 victory in the first game, while the Hawks answered back in game two with a 3-1 win, thanks to a 20-save performance from Joshua Ravensbergen.

The second-place Okanagan Rockets (16-3-0-1) and ninth-place North Island Silvertips (0-17-0-1) square off on Saturday and Sunday in their third and fourth meetings of the season. The Rockets secured two victories over the Silvertips to begin their season on September 24th and 25th. Okanagan has been on a roll leading up to the showcase, winning seven of their previous eight games. The Rockets’ success has been helped by their scoring depth, with five players (Erik Pastro, Hunter Laing, Kaslo Ferner, Brayden Schwaerzle, Ben Strobel) all recording at least 20 points on the season. The goaltending tandem of Colton Jugnauth and Dylan Adams have contributed to their success as well, as both goaltenders rank in the top-five among all U18 goaltenders in goal against average.

In Kelowna, the third-place Okanagan Rockets (14-6-1-0) welcome the sixth-place Greater Vancouver Canadians (11-8-0-1) for a weekend series. The two teams previously met on November 5th and 6th, where the Canadians earned a pair of victories at the Richmond Olympic Oval. The Rockets have been playing solid hockey as of late, earning victories in seven of their previous eight games. Tanner Sunderman has found his name on the scoresheet lately, as the Okanagan forward is currently on a five-game point streak where he has collected 10 points (7g-3a). In their most recent outing, Sunderman found the back of the net four times in a Rockets’ victory. Canadians’ forward Massimo Ardizzoni has been a consistent scorer recently, earning six points (3g-3a) over a six-game point streak. Forward Yukai Zhang has enjoyed success against the Rockets’ this season, registering six points (3g-3a) in their two meetings.

The first-place Fraser Valley Thunderbirds (15-4-1-1) and take on the ninth-place Vancouver NE Chiefs (4-12-2-2) in a home-and-home series. Winner of four of their last five, the Thunderbirds have met the Chiefs on two previous occasions this season, earning a victory and a tie during their weekend series on October 8th and 9th. Fraser Valley forward Noah Lawless found the back of the net three times, while Manwinder Sandhu (1g-3a), Nico Venier (2g-2a), Dayton Abbott (2g-2a) all recorded four points in the two games. Thunderbirds' forwards Troy Horn (2g-2a) and Cohen Poulin (0g-4a) have been productive over their last three games, as they’ve each registered four points. Over the past three games, Chiefs’ forward Callum McSherry has recorded five points (4g-1a). On the season, McSherry is tied with Maximillian Aysslinger for the Chiefs' lead in goals with 11.

The first-place Okanagan Rockets (11-1-1-1) travel to Kamloops to take on the ninth-place Thompson Blazers (1-17-0-0) in the first meeting of the season between the two teams. Both teams attended the U15 AAA Okanagan Classic in Kelowna last weekend. Winners of four straight league games, Gavin Wood has been a consistent producer for the Rockets, putting up eight points (5g-3a) during the winning streak. The Rockets’ offense has been led by a multitude of players, as eight skaters (Hudson Getzlaf, Gavin Wood, Nathan Juch, Riley Chandler, Raine Lepin, Carson Callon, Kylen Marten, Hayden Laing) have recorded at least 10 points through 14 games for the Rockets’ this season. Blazers’ forward Keegan Sanders has recorded three points (2g-1a) over his past two league games, and leads all Thompson skaters with 13 points (8g-5a) on the season.

The fifth-place Fraser Valley Thunderbirds (7-4-1-1) take on the seventh-place Vancouver NW Hawks (7-9-0-0) in a weekend series. Winners of three of their last five, Fraser Valley forward Phoenix Hinks has been a consistent scorer over that stretch, picking up six points (2g-4a) over a five-game point streak. Allowing only 24 goals against through 13 games this season, the goaltending tandem of Graydon Van Der Zweep and Mason Clegg have been among the best goaltenders in the U15 league, each allowing less than two goals per game on the season.

The fourth-place Vancouver NE Chiefs (9-4-0-0) welcome the eighth-place North Island Silvertips (2-14-0-0) for a pair of games on the Mainland. Chiefs’ forward Charles Robinson will look to improve on his league-leading 23 goals and 31 points. Robinson has been excellent lately, scoring nine goals and adding three assists over his last three games. Chiefs’ netminder Maverick Bell continues to stand tall in goal, as he ranks tied for second with six victories on the season, with two shutouts.