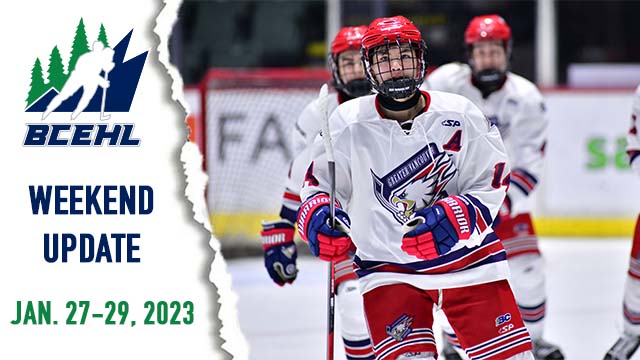 Saanichton, B.C. – The U18 showcase is set to take place at the Abbotsford Centre starting Friday. Let’s take a look at what else is going on around the BCEHL!

The Female U18 AAA league is not in action this weekend as they have a league-wide bye week. After participating in the Winter Classic last weekend, the Northern Capitals and Thompson-Okanagan Lakers will both travel to Winnipeg for the Female Sport School Challenge.

Starting things off on Friday at the U18 showcase, the sixth-place Valley West Giants (13-10-0-2) and the third-place Vancouver NW Hawks (18-7-2-1) meet inside the Abbotsford Centre. The Hawks enter the weekend on a roll, with victories in five of six games since the holiday break, including three straight wins. Hawks’ forward Deacon Drummond has recorded points in five of his last six games, totaling seven points (2g-5a) over that span. Drummond’s 33 points on the season (12g-21a) leads the team and puts him 14th in league scoring. The Giants enter the weekend on a roll as well, having earned victories in four of their last five. Giants’ forward Carter Nailen’s four points (2g-2a) helped his team to a 5-4 victory over the Vancouver NE Chiefs on January 18th.

The seventh-place Cariboo Cougars (10-13-1-0) take on the second-place Okanagan Rockets (18-3-2-1) on Saturday and Sunday. The Cougars earned a pair of victories at the Winter Classic last weekend, which included a six-goal performance on Saturday by Cougars’ forward Mason Loewen. Saturday’s victory also marked the Cougars’ first victory at the Winter Classic since the annual tradition began in 2019. The Rockets will look to gain some valuable points as they continue their pursuit of first place in the standings. Rockets’ forwards Erik Pastro and Hunter Laing will look to continue their success against the Cougars, as both forwards have recorded three points in two previous meetings this season.

The fourth-place Fraser Valley Thunderbirds (15-11-0-0) and the league-leading Greater Vancouver Canadians (20-3-3-1) square off for a pair of games. A four-point performance by Jamie Hikida (2g-2a) helped the Canadians earn a 6-5 overtime victory over the Valley West Giants in their most recent action on January 21st. Winners of three straight, the Thunderbirds' offense has been clicking during their streak, as they’ve combined for 26 goals over their last three games. Tyler Pretty’s five-goal performance on January 23rd propelled the Thunderbirds’ forward to a tie for the league lead in goals with 24.

The eighth-place Vancouver NE Chiefs (9-15-2-2) host the ninth-place Thompson Blazers (8-18-0-1) for two games at Scotia Barn. The Chiefs have been rolling recently, with victories in three of their previous four. Chiefs forward Callum McSherry is currently on a four-game point streak, where he has recorded nine points (4g-5a). The Blazers have edged the Chiefs in both of their previous meetings this season, with victories on November 12th and 13th. Owen DeWitt registered six points (2g-4a) over the two meetings, which included a five-point performance (2g-3a) in Thompson’s 6-3 victory on November 13th.

In a meeting of two red-hot squads, the first place Fraser Valley Thunderbirds (22-4-1-1) meet the seventh-place South Island Royals (15-13-0-0) for two games on the Island. Fraser Valley, winners of 10 straight games, boast the top goaltending tandem in the U17 league, as Jake Torget and Nathan Niedermeiser have combined to allow only 56 goals through 28 games. On the offensive side of the puck, the Thunderbirds also possess the top ranked offense in the league, as they've averaged nearly five goals per game. Thunderbirds’ forwards Mandwinder Sandhu (15g-26a) and Nico Venier (18g-19a) both rank inside the top five in U17 scoring. Strong goaltending has helped the Royals to a five game winning streak, having allowed two goals or less in each game. South Island netminder Cooper Anderson earned his first shutout of the season on January 14th in a 6-0 victory.

The sixth-place Greater Vancouver Canadians (16-11-1-1) look to climb the standings as they take on the fourth-place Cariboo Cougars (16-7-1-3) in a battle for positioning. The two previous meetings between the teams were tightly contested, as four different goal scorers led the Cougars to a 4-2 victory on November 12th, while a four-point performance from Luca Rizzardo helped the Canadians answer back with 4-3 victory on November 13th.

In a meeting between two of the top teams in the U15 league, the first-place Vancouver NE Chiefs (14-4-1-0) welcome the third-place Okanagan Rockets (13-1-1-1) for two games. In the Chiefs’ most recent action, Rylan Osmack’s three-point effort helped his squad to a 3-0 victory against the Cariboo Cougars on January 15th. Osmack is in the midst of an eight-game point streak, where the forward has registered 14 points (9g-5a). The Rockets enter the weekend on a six-game winning streak. The goaltending tandem of Finn McKiernan and Tyson Adams have combined to allow an average of two goals per game on the season. McKiernan has yet to lose a game this season, having posted a perfect 8-0-0-0 record so far this season.

The sixth-place Fraser Valley Thunderbirds (10-6-1-1) face off against the seventh-place Vancouver NW Hawks (9-12-0-0). Having allowed only 35 goals through 18 games on the season, Fraser Valley netminders Mason Clegg and Graydon van der Zweep have been the top tandem in the U15 league this season. Clegg’s 1.75 goals against average leads all U15 goaltenders and is tied with Okanagan’s McKiernan with three shutouts. Hawks’ forward Rhys Ulinder recorded back-to-back hat tricks in a pair of victories on January 14th and 15th.