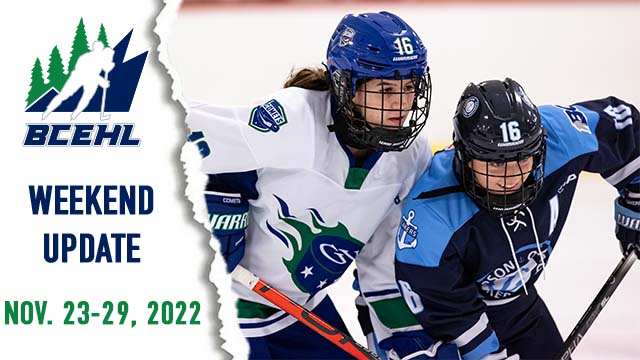 Saanichton, B.C. - A busy week across the BCEHL is highlighted by the first U17 showcase of the season, slated to take place at the Richmond Ice Centre. Let’s find out what else is going on across the BCEHL!

The fourth-place Thompson-Okanagan Lakers (6-8-0-1) travel to the Lower Mainland to take on the fifth-place Greater Vancouver Comets (0-15-2-0). The two teams have met on three previous occasions. Their first meeting took place on October 1 at the Female U18 showcase where the Lakers secured a 4-3 victory. The other two meetings took place in Kelowna on October 8th & 9th, where Thompson Okanagan took both games by a combined score of 7-2. The Lakers are coming off a weekend series against the Northern Capitals where they won two of three games. During the series, Thompson-Okanagan were led by three skaters who recorded three or more points as Ava McLeod (3g-1a), Jaylen Moraice-Budalich (1g-2a) and Emma Deleurme (0g-3a) all had successful weekends offensively. The Comets’ most recent outing took place on the Island against the Vancouver Island Seals, where the game ended in a 3-3 tie. Greater Vancouver had three different scorers in this contest as Grace Cooper, Paige Riley and Kirsten Lai all found the back of the net.

Currently on a five-game winning streak, the third-place Vancouver NW Hawks (9-4-1-0) square off with the Vancouver NE Chiefs in a home-and-home series. Hawks’ forward Rylan Oatman is in the midst of a five-game point streak, accumulating 10 points (2g-8a) over that span. The Hawks also received offensive contributions from Deacon Drummond (5g-4a), David Yoon (4g-5a) and Anthony Ip (1g-7a). In the Hawks' goal, Joshua Ravensbergen’s seven wins ranks first among all U18 goaltenders, as does his sparkling 1.59 goals against average.

The U17 league kicks off its first showcase of the season, scheduled to take place at the Richmond Ice Centre from November 25th-27th.

A pair of matchups highlight Friday’s action, as the first-place Fraser Valley Thunderbirds (10-2-1-1) meet the fourth-place Vancouver NW Hawks (8-3-1-1), and the second-place Valley West Giants (9-4-1-0) collide with the third-place Greater Vancouver Canadians (9-4-0-0). Hawks’ goaltender Matthew Bowman’s six victories are tied with Giants’ goaltender Taylor West for tops in the league. Bowman and the Hawks will be put to the test as the Thunderbirds possess the U17 league’s top two scorers in Manwinder Sandhu (7g-15a) and Nico Venier (11g-10a). Scoring 14 goals in 14 games, Giants’ forward Devon Mahil will look to find the back of the net against one of the league’s top goaltending tandems. The performance of Marcus Taylor (2.03 goals against average) and Jack Taylor (2.86 goals against average) have guided the Canadians to the second-lowest goals against average at 2.54.

On Saturday, the fifth-place Cariboo Cougars (8-3-0-1) meet the 10th place North Island Silvertips (0-13-1-0). The Cougars enter the showcase winners of four of their last five games. Over that span, Rylan Bissett led the Cougars in scoring with six points (4g-2a). With 11 goals on the year, Bissett is tied for third in goals among U17 skaters. The Silvertips have received contributions from their defenders this season, as Kane Dickerson is tied with Gavin Munro (2g-3a) for the team-lead in points with five (2g-3a). North Island blueliner James Clendenning’s three points (1g-2a) is good for third in scoring among Silvertips skaters. Later in the day, the seventh-place South Island Royals (6-7-0-0) face off against the ninth-place Vancouver NE Chiefs (2-9-1-1). Both teams possess a balanced attack, as seven Royals skaters (Carter Zeeben, Tyler Delli Carri, Riley Rich-Holden, Aden Glenn, Ben Wetterberg, Linkin Niedoba, Sullivan Humeniuk) have collected at least 10 points this season, while the Chiefs have four skaters (Brayden Yee, Agam Rawan, Mark Wu, Maximillian Aysslinger) who have recorded double-digit points.

On Sunday, the sixth-place Okanagan Rockets (8-5-1-0) take on the Royals. Scoring 4.00 goals per game as a team this season, the Rockets are led statistically by a trio of players. Maguire Nicholson, leads the squad in scoring (8g-9a-17pts), Kaden Woodcox is first among U17 blueliners with 14 points (3g-11a) and forward Clayton Gillmore ranks second in the U17 league with 12 goals. The eighth-place Thompson Blazers (3-9-0-0) take on the North Island Silvertips. The Blazers enter the weekend playing solid hockey as of late, winning three straight games. The duo of Noah Paulsen and Owen Dewitt have had their names all over the scoresheet during the winning streak, with Dewitt collecting 10 points (4g-6a) and Paulsen recording eight points (3g-5a).

Coming off a series split against the Vancouver NW Hawks last weekend, The sixth-place Vancouver NE Chiefs (6-3-0-0) meet the league-leading Valley West Giants (7-2-3-0) for a home-and-home series. A pair of Chiefs' skaters recorded points in both games against the Hawks, as William Song scored a goal and added three assists, and Dayton Killam chipped in with a goal in each game. In their game on Sunday, goaltender Maverick Bell stopped 23 of 24 shots in a 2-1 victory.

Up north, the seventh-place Cariboo Cougars (5-5-2-0) welcome the ninth-place Thompson Blazers (1-13-0-0) for a pair of contests. The Cougars enter the matchup winning three consecutive games. Linden Lakusta backstopped the Cougars in two of the contests, while Mathias Ramos-Gadbois won the other. The pair have combined to allow 2.50 goals per game on the season, which ranks fourth among U15 teams. Cougars’ defender Wesley Lizotte found the back of the net three times during their win streak, and has four goals on the year, which is tied for first among U15 blueliners. The Blazers earned a 1-0 victory against the North Island Silvertips in their most recent action, with Jarrek Hluschyk picking up the shutout. Keegan Sanders leads the Blazers with 10 points (6g-4a) through 14 games.

The second-place Okanagan Rockets (7-1-1-1) look to climb the standings as they travel to the Island to take on the North Island Silvertips. Over their last six games, the Rockets have earned five victories and one tie. During that time, Rockets’ goaltender Finn McKiernan has picked up a pair of shutouts and is one of only two goaltenders in the U15 league who have recorded at least two shutouts on the year, with Mason Clegg (Fraser Valley) being the other.