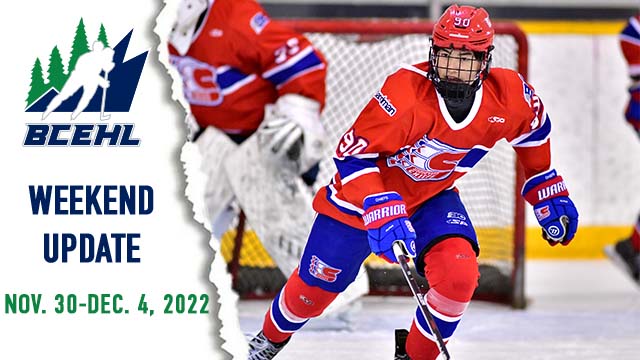 Saanichton, B.C. - This week will feature a full slate of games across the U18, U17 and U15 leagues, while the Female U18 league is on a bye-week. Let's take a look at what is happening across the BCEHL!

The Female U18 league is not in action this weekend as they have a league-wide bye. During the bye week, four of the league’s teams will be attending different tournaments across the country. The Thompson-Okanagan Lakers and Vancouver Island Seals will head to Brampton, Ontario for the Two Nations Cup, while the Fraser Valley Rush and Greater Vancouver Comets will make their way to Kitchener, Ontario for the USA Canada Cup Series.

In Richmond, the second-place Greater Vancouver Canadians (12-2-1-0) look to climb to the top of the standings as they welcome the ninth-place North Island Silvertips (0-13-0-1) for a pair of contests. The two teams previously met on October 8th & 9th in Nanaimo. The Canadians' winning streak now sits at six games after earning three victories this past week. Sean Richards' six points (4g-2a) led the way for Greater Vancouver last week, which included a hat-trick in Sunday's 10-1 victory against the Cougars. Goaltending has been a key contributor to the Canadians’ recent success. The tandem of Markus Lam and Remy Quintoro have allowed more than one goal only twice during their six-game winning streak. Silvertips’ forward Seth Habsburg has had a scoring touch as of late, collecting four points (1g-3a) over his last four games.

The league-leading Okanagan Rockets (13-3-0-0) welcome the fourth-place Vancouver NE Chiefs (8-5-2-1) to Kelowna in a matchup of two of the hottest teams in the U18 league. The Rockets enter the weekend winners of four straight games, and have played solid hockey on both sides of the puck. Averaging 4.5 goals per game, Kaslo Ferner has led the Rockets with eight points (3g-5a) over that span. In goal, Colton Jugnauth and Dylan Adams combined to allow only seven goals during their winning streak. A potent offense featuring two of the U18 league’s top four scorers will pose a tough test for the Rockets. Lucas Baxter’s 26 points (7g-19a) and Josh Kelly’s 25 points (15g-10a) lead a Chiefs squad who have earned four wins and one tie in their last five. Kelly comes into the weekend having scored nine times and added one assist in his last four games.

After a successful showcase in Richmond, the U17 league returns to a normal schedule this week. In a matchup between teams separated by three points in the standings, the first-place Fraser Valley Thunderbirds (12-3-1-1) and third-place Okanagan Rockets (11-5-1-0) meet for a pair of contests in Kelowna. The two squads met at the showcase on November 26th where the Rockets edged the Thunderbirds 2-1. Allowing only three goals over three games last weekend, the goaltending tandem of Jake Torget and Nathan Niedermeiser continue to turn heads for the Thunderbirds. Torget’s successful weekend that included a 2-0 shutout victory brought his goals against average to 1.00, the lowest in the U17 league. The Rockets enjoyed a successful weekend at the showcase, winning all three games at the Richmond Ice Centre. Russell Weatherhead’s five points (0g-5a) led the Rockets in scoring over the weekend.

The Greater Vancouver Canadians and Vancouver NW Hawks renew acquaintances after meeting at the showcase on November 26th. A goal apiece from James Lin and Kendric Liu, along with a pair of assists from Miller Bruckshaw led the Canadians to a 2-1 victory over the Hawks. The Hawks will again look to slow down Greater Vancouver’s third ranked offense, as they’ve allowed only 3.00 goals per game, which is also good for third in the U17 league. Hawks’ goaltender Tyler Holtz had a pair of strong outings at the showcase, allowing only two goals in each of his two appearances. The Canadians’ offensive success has been helped by the spark that they receive from their blueline. Defenders Lucas Epp and Miller Bruckshaw are both among the leading scorers among U17 blueliners, as they both sit in the top 10 with 13 points respectively.

The second-place Valley West Giants (8-3-3-0) meet the seventh-place Vancouver NW Hawks (7-7-0-0) for a home-and-home series. The Giants’ offense has been consistent, with the team recording at least four goals in nine of their last 11 games. Scoring has also been consistent throughout their lineup, with five players recording at least 10 points on the season (Brock Saundry, Ashton Locke, Adam Lenarduzzi, Carter Scott, Ronan Coopman). The Hawks’ most recently split a weekend series against the Vancouver NE Chiefs. Forward Hudson Guiel led the Hawks to a 5-4 victory on Saturday with a five point performance (1g-4a).

The fifth-place Greater Vancouver Canadians (7-4-1-0) embark on a busy week that begins with a Wednesday night meeting with the Fraser Valley Thunderbirds in Richmond. They will then travel to the Island for a pair of games against the North Island Silvertips. Greater Vancouver has met both of their upcoming opponents already this season. Opening their season at the U15 showcase on September 23rd, they defeated the Thunderbirds 3-2 with goals from Jayden Rodas, Gavin Dacpano and Kaden Meyer. Their most recent action featured a 9-2 victory over the Silvertips led by multi-goal efforts from Helius Yuzhe Guan (2g), Nishaan Gill (2g-1a) and William Trolland (2g).

Ethan Hill continues to impress offensively for the eighth-place Silvertips (2-12-0-0) as the forward has recorded goals in three of his last four games. Hill’s 12 goals on the season is third among U15 skaters while his 17 points rank sixth.