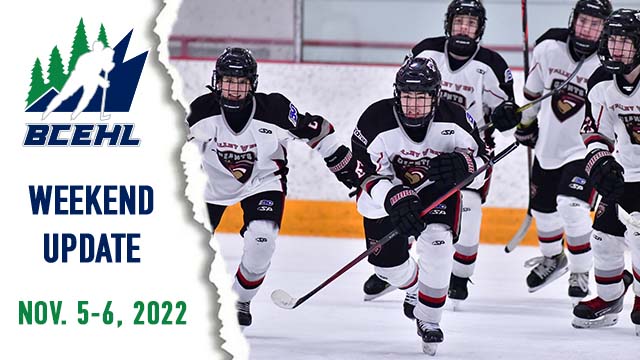 Saanichton, B.C. - Another weekend of BCEHL hockey is nearly upon us! On the island, the Northern Capitals and Vancouver Island Seals conclude five-straight head-to-head matchups with a pair of games this weekend. Let’s take a look at what is going on across the BCEHL!

After playing a three-game series in Prince George last weekend, the third-place Capitals (5-8-1-0)  travel to the island to take on the second-place Seals (10-4-0-0) for a pair of games in the league's lone series this weekend. The Seals won two of three previous meetings with defense and goaltending playing an important role. Friday’s contest saw strong goaltending performances from Capitals’ goaltender Payton Planetta and Seals’ goaltender Bronwynn Lee in a 2-1 Seals victory. The Seals carried their momentum into Saturday’s game where Grace Gonyer’s three-point performance (2g-1a) led the Seals to a 4-1 win. On Sunday, the Capitals finished the weekend series strong as Planetta backed the Capitals to a 2-0 victory.

The second-place Greater Vancouver Canadians look to continue their climb up the league standings when they meet the Valley West Giants. Last weekend, the Canadians split a two-game series with the Okanagan Rockets. With a lineup featuring three of the league’s leading scorers, Tyler Tse (8g-7a) William Huo (8g-5a), Jordan Luk (1g-12a), the Canadians boast one of the most potent offenses in the league, averaging over five goals per game. Goaltending has also been a strength of the Canadians through their first 10 games, with the tandem of Remy Quintoro and Markus Lam combining to allow only 2.30 goals per game.

The Cariboo Cougars travel to the Lower Mainland to take on the Vancouver NE Chiefs. The Cougars’ have collected an impressive five wins and 11 points. Parker White has led the team offensively, recording 13 points (4g-9a), while Jaiden Jakubowski has provided strong goaltending, earning victories in four of his five starts.

In another meeting between two of the top teams, the league-leading Okanagan Rockets welcome the third-place Fraser Valley Thunderbirds to Kelowna. Winners of eight of their first 10 games, the Rockets have had success at both ends of the ice, scoring a league-high 67 goals, while allowing only 22 goals against. The Rockets have split goaltending duties equally between Dylan Adams and Colton Jugnauth, with the pair starting five games apiece and winning four games each. Kaiden Schaupmeyer’s impressive start continues with his 11 points (2g-9a) leading all defenders.

The first-place Okanagan Rockets visit the Greater Vancouver Canadians in a matchup between two of the top offenses in the league. The Rockets are led on the scoresheet by Clayton Gillmore, whose 10 goals puts him tied for the league lead in that category, and Kaden Woodcox, whose 11 points (2g-9a) is tied for first among all defenders.

Up north, the fourth-place Cariboo Cougars welcome the second-place Fraser Valley Thunderbirds. In their most recent outing, the Cougars took down the Okanagan Rockets 4-3, handing them their first loss of the season. In the two-game series, Carter Boomer and Rylan Bissett were involved offensively, each recording four points (3g-1a).

In a meeting between two teams tied on top of the league standings, the Okanagan Rockets and Valley West Giants square off in a marquee matchup. This will mark the second and third meetings between the two squads this season after the Giants edged the Rockets 2-1 in overtime at the U15 showcase on September 24. Hudson Getzlaf has led the Rockets offensively this season as he sits first in goals (10) and ranks fifth in points (12) in the U15 league. The Giants possess a balanced offensive attack with five skaters (Ashton Locke, Carter Scott, Brock Saundry, Cody Wales, Ronan Coopman) having scored at a point-per-game pace or better.

Winners of four of their previous six games, the Fraser Valley Thunderbirds take on the Thompson Blazers. Goaltending continues to be a bright spot for the Thunderbirds, with the tandem of Mason Clegg and Graydon Van der Zweep allowing a combined total of 13 goals through the team’s first eight games. Thunderbirds’ forward Ryley Green’s 11 points rank fifth in the league scoring, with his nine assists leading the U15 league in that category.

Elsewhere, the Cariboo Cougars travel to the island to take on the North Island Silvertips. In their most recent outing, Wyatt Callander’s two points (1g-1a) led the Cougars to a 2-1 overtime victory over the Fraser Valley Thunderbirds. Jaxon Larmand has been a strong contributor to the Cougars’ offense, currently sitting third in goals (9) and points (13) among all U15 skaters. In a home-and-home series, the third-place Vancouver NW Hawks meet the Greater Vancouver Canadians. Scoring has been a strength for the Hawks through their first games, as they’ve put up nearly four goals per game, which ranks second in the league. Individually, Jack Poole and Rhys Ulinder have enjoyed success on the scoresheet this year, with Poole’s 14 points (5g-9a) putting him second in league scoring, while Ulinder’s 10 points (7g-3a) rank seventh.