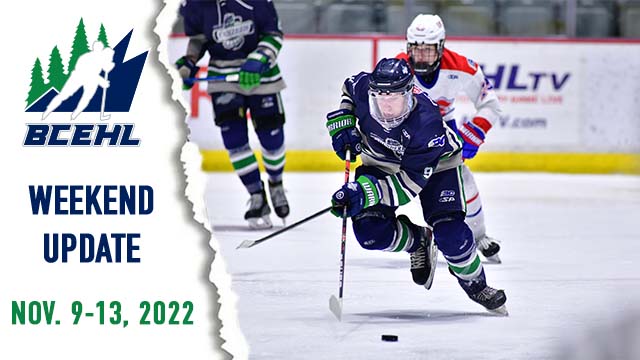 Saanichton, B.C. - All 10 teams across the U17 league will be in action this weekend, including the Greater Vancouver Canadians, winners of seven straight. Lets take a look at what else is going on across the BCEHL!

In this weekend’s lone series, the league-leading Fraser Valley Rush (13-0-0-0) take on the Greater Vancouver Comets (0-12-1-0). Fraser Valley's roster can be found all over the scoring leaderboard, including the top four scorers who are all members of the Rush. Leah Barnard, who recently committed to Western University, has continued her sensational start to the season with 36 points (14g-22a) through 13 games, including nine points (2g-7a) in three games against the Comets. On defense, Aynsley D’Ottavio’s 29 points (6g-23a) ranks first among all blueliners. The reigning Female U18 Player of the Year has totaled nine points (1g-8a) over Fraser Valley’s previous four games. The Comets have been led statistically by Grace Cooper and Kirsten Lai, who have collected six points apiece. On their blueline, Paige Riley's five points (2g-3a) is among the league leaders in defensive scoring.

In a Wednesday night contest, the Fraser Valley Thunderbirds (8-4-0-0) meet with the Vancouver NW Hawks (6-4-1-0) in West Vancouver. Winners of five of their last six, the Thunderbirds are trending in the right direction, sitting third in the league standings entering the weekend. The scoring duo of Brendan Ruskowski and Tyler Pretty have played a significant role in their team’s success over that period with Ruskowski recording 14 points (6g-8a), and Pretty collecting 11 points (4g-7a) over their last six games. Playing equally well as of late, the fourth-place Vancouver NW Hawks enter Wednesday’s matchup winning four and earning one tie in their last six games. The duo of Deacon Drummond and David Yoon have led the way for the Hawks, as Drummond has recorded eight points (4g-4a) in his last six, while Yoon has collected nine points (6g-3a) and is currently on a five-game goal streak.

On the island, the Valley West Giants visit the North Island Silvertips for two games in Nanaimo. Four skaters have scored at over a point per game pace or better this season as McCarthy Richardson (10g-4a), Miles Burgin (4g-10a), Nishaan Parmar (4g-9a) and Logan Johnston (3g-7a) have provided strong contributions to the Giants’ offensive success. Last weekend’s series between the Silvertips and Blazers included a pair of one-goal games, with Saturday’s contest going into overtime. Zaya Morro, Anthony Alexander and Jaxon Rich found the back of the net for the Silvertips.

Outside of league play, the Cariboo Cougars, Okanagan Rockets and Greater Vancouver Canadians will take part in the Okanagan Classic, a tournament comprised of U18 AAA teams from British Columbia and Alberta. The Okanagan Classic is scheduled from November 10-13 in Kelowna, B.C.

In a weekend where all 10 teams see action, the Vancouver NE Chiefs enter this weekend’s series with the Thompson Blazers winners of two consecutive games. Over those two victories, Maximillian Aysslinger led the charge with six points (3g-3a) while forwards Agam Rawan (1g-4a) and Brayden Yee (4g-0a) chipped in offensively as well.

The South Island Royals and the Fraser Valley Thunderbirds meet in what should be a high-scoring matchup, as both teams are among the leaders in goals per game, with the Royals averaging 4.78 goals per game and the Thunderbirds averaging 4.30. Royals’ forward Tyler Delli Carri’s offense has been clicking as of late, picking up seven points (2g-5a) over the team’s last four games. Delli Carri’s 14 points on the season (5g-9a) ranks second on the team, behind Carter Zeeben’s 16 points (10g-6a) putting Delli Carri in a tie for third in the U17 league. Thunderbirds’ forward Nico Venier has totaled five points (3g-2a) in Fraser Valley’s last four games, and sits second in the U17 scoring race with 15 points (8g-7a) on the year.

The second-place Greater Vancouver Canadians (7-2-0-0) enter their series against the first-place Cariboo Cougars (7-2-0-1) firing on all cylinders, collecting seven consecutive wins. Yukai Zhang and Nicholas Kolb have led the way offensively for the Canadians over the past three games, collecting eight points (4g-4a) and six points (1g-5a) respectively. In net, the tandem of Jack Taylor and Marcus Taylor has been rock solid, as both are among the league leaders in goals against average.

In the U15 league, the Vancouver NW Hawks and the Vancouver NE Chiefs meet in a home-and-home series. The Chiefs have been rolling as of late, picking up victories in four of their last five contests. Charlie Robinson has been scoring at a stellar pace, finding the back of the net 13 times in seven games, leading all U15 skaters. In goal for the Chiefs, Tyson Liu’s four wins ranks second among all U15 goaltenders, and sits tied for first with a goals against average of 2.12.

Elsewhere, the Thompson Blazers and the North Island Silvertips meet for the second time this season. In their opening matchup on September 25 at the U15 showcase in Langley, Ethan Hill picked up a pair of goals for the Silvertips in a 8-5 victory. Hill, who leads the Silvertips in scoring with nine points (6g-3a), enters the weekend with four points (2g-2a) over his last two games. Aiden Baker and Keegan Sanders lead the Blazers in scoring with seven points apiece.

Outside of league play, the Valley West Giants, Okanagan Rockets, Fraser Valley Thunderbirds will participate in the Rocky Mountain Classic, a tournament featuring U15 AAA teams from British Columbia, Alberta, Saskatchewan and Manitoba. The event will take place from November 9-13 in Calgary, A.B.